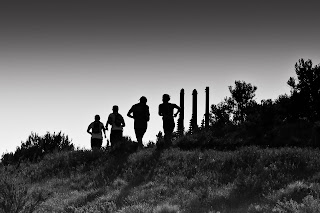 Tammy was excited to discover that a local pack of ultra-endurance runners had set up a 12-hour event where participants try to complete as many laps as possible of a 6-mile trail right here in our foothills (Boise has a fantastic network of running/mountain-biking trails). This format lets ultrarunning crazies at different levels of development all play together: the newer crazies can do just a few laps, while more seasoned crazies can go for substantial distances, all in the same event.
As her "support crew," I was thrilled that this would be happening just a couple of miles from our house (hey, it was a loooong drive to those the two 12-hour trail races in Moab she did, awesome as they were).
And Tammy was thrilled to report that they would have a mountain-biking division. Uh, oh. 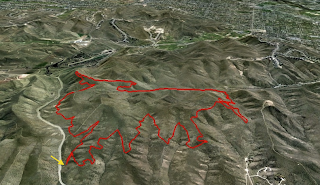 But, dear, I'm the crucial support crew for you on your crazy ultra-endurance runs! See, I need to mix your custom goo for you and reload your water and... Well, yes, I suppose you could pre-mix it the night before and manage your own water... But you're forgetting that I've only done maybe two quick rides this season. You know that with no conditioning my rear couldn't handle any kind of time in the saddle, much less 12 freaking hours! Well, yeah, I suppose I could just do a few laps to participate a bit while I cheer you and the other crazies on...
So we took my bike.
6:00am Saturday morning. They all counted down and took off while I was messing with getting my front brakes to work right, and I was able to hit the trail 15 minutes later.

It turned out to be a moderate single-track mountain-bike loop, with about 800 feet of climbing and of course 800 of downhill. Soon I was back at the trailhead to record the lap, then I headed out again going the opposite direction. 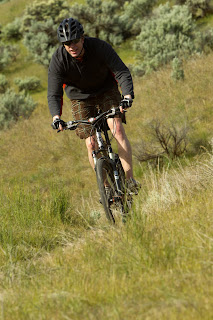 My rear wasn't complaining too badly after a few laps, so I thought I'd maybe try to work in a solid six laps over the course of the day. That seemed like a respectable amount of time/distance/elevation for the "support crew" to Represent. Besides, it was kind of fun checking in on all of the runners (especially my runner) with each pass of the course, going back and forth in alternating directions.
Soon I had been adopted as the runners' Token Biker for the day. Many asked how many laps I was going for as I passed, and I would explain that I was just there with Tammy, having a little fun, and that I would stop when she did.
After five or six hours, though, I noticed that I still felt fine -- and I wasn't slowing down at all. So naturally I started flirting with the idea of just going for it and seeing if I could really keep riding like that for the entire 12 hours and complete 12 full laps, whether or not Tammy wanted to keep going! Since I had no ultra-endurance experience or preparation, this unusual effort would also be a great test of the "ready state" that CrossFit is supposed to be giving me.
Well, apparently Tammy knows me too well! She had mixed twice as much goo as she needed the night before, just so I could fuel a very long day right along with her. 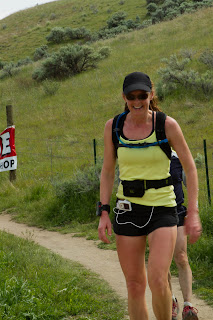 In the end, we had a great time with a nice group of folks, and we enjoyed a clean sweep of both the running and the mountain-biking divisions that day. Woo! Team Perkins brings it! :^)
I was able to ride steadily through all 12 hours, from 6:00am to 6:00pm, covering 12 laps. That's about 73 miles, and almost 20,000 vertical feet of elevation change.
More difficult in my opinion was Tammy running all 12 hours, covering 9 laps. That is just shy of 55 miles with almost 15,000 vertical feet of elevation change. On foot!
We were certainly depleted, but not disabled, and we recovered quickly. In fact, I didn't suffer any soreness to speak of, despite becoming a spontaneous ultra-endurance athlete for a day. Heading as usual to the CrossFit gym early Monday morning, we turned in decent performances, smiling through the strain because we knew it was preparing us for the next fun challenge to come our way.
(Thanks to Longrun Picture Company
for photographing everyone that day!)